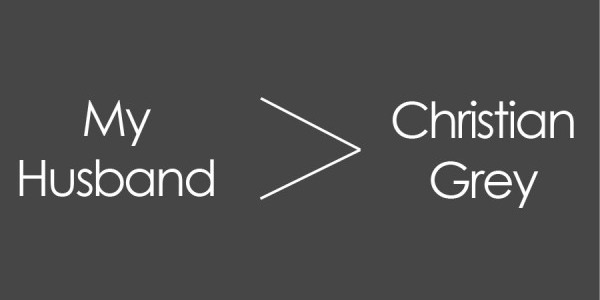 I read a very good blog post regarding 50 Shades of Gray and God’s design for sex. Since it goes so well with my theme of In and Out, I am posting a link to it here: http://haleymorgansmith.wordpress.com/2014/07/29/the-problem-with-50-shades-of-grey/. The image for this post is from her blog.

The best response I’ve seen so far to Fifty Shades of Grey. 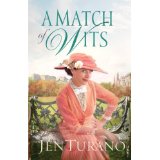 Under the “What are you reading now?” category, I wanted to mention that Jen Turano’s A Match of Wits is out this month. This is a fourth book in a series of historical Christian romances set in the Gilded Age. I have wanted to read Agatha and Zayne’s story for a long time because Jen has cleverly hinted at their attraction for one another already in her other three books.

A Change of Fortune Lady Eliza Sumner is going incognito as the plump governess of Agatha Watson’s younger sisters, Grace and Lily. As Miss Sumner, she is called into service as an extra guest at a dinner party the Watsons are throwing. This leads to humor as her disguise trips her up, making Hamilton and Zayne Beckett wonder if she has had too much to drink. I liked the humor and the kind way the Becketts look out for her. Eliza doesn’t want New York society to know that she has a title, because she is tracking down the man who stole her family’s fortune and tried to ruin her father’s reputation.

In A Most Peculiar Circumstance, when Arabella Beckett, suffragist, meets Theodore Wilder, a man with strong beliefs about a woman’s place, she is in jail after trying to rescue a young woman who was being lured into the sex trade. I read this series out of order and this is actually the first book that I read. I liked it, but did not find it as full of humor as Change of Fortune and, the most fun of the books so far, A Talent for Trouble.

A Talent for Trouble’s heroine Felicia Murdock is spunky and fun. Like Arabella and Theodore, she is paired with someone who is very different. While it’s true that Grayson Sumner loves a good adventure, he has a dark and dangerous past. His fascination for Felicia means she is nearby when the past catches up to him. Little by little, he admits the kind of world he was involved in and Felicia has to decide if he can be trusted after all.

Throughout these books is a running gag regarding marriage proposals gone awry, and the story of the bold intrepid reporter Agatha Watson and Zayne Beckett, her favorite adventure sidekick, is hinted at. The next book, out this month, will tell Agatha and Zayne’s story. I believe, based on how enjoyable the other books have been, it will be well worth reading. For more information about Jen Turano and her books, check out her website, or to sample her writing download a free novella.

In publishing news this past week, News Corp has made a deal to buy Harlequin, and make it a division of HarperCollins. According to this Publisher’s Weekly article, HarperCollins has previously bought Thomas Nelson and merged it with Zondervan to form HarperCollins Christian Publishing. Harlequin publishes hundreds of romance books per month and distributes them mainly by mail to consumers’ houses. Why does this interest me? Harlequin today has many romance lines. Just about any thing you can think of, from historical romance to vampires and werewolves, including erotic stories. But, one line at Harlequin is called Love Inspired. Love Inspired books are Christian romances. Literary agent Steve Laube writes on his blog, “Harlequin’s Love Inspired and Heartsong lines publish 20 new romance novels each month in the contemporary, suspense, and historical categories. Since they recently expanded my numbers may be a little off, but you get the general idea. 240 new titles per year written with the Christian reader in mind. This is significant. It makes them the single largest publisher of Christian fiction in the industry by sheer number of annual titles.”